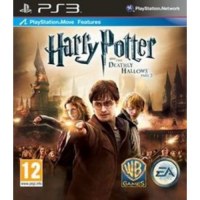 We buy for: £7.76
Sell PS3 Games. Get Cash for Harry Potter and the Deathly Hallows Part 2. Step into the roles of your favourite heroes in the epic finale of the entertainment event of the decade. Playing as Harry and other key characters in the Harry Potter and the Deathly Hallows - Part 2 videogame, you are on a dangerous and urgent quest to locate and destroy the remaining Horcruxes, and with them, Voldemort. Break into the high security vaults of Gringotts Bank, escape Fiendfyre in the Room of Requirement and battle Voldemort's most powerful allies as you defend Hogwarts in this action-packed experience. Featuring the most epic battles of any Harry Potter game gone before, this is the ultimate showdown against Voldemort and his Dark forces. The fate of the wizarding world rests in your hands in the final battle of Hogwarts. KEY FEATURES: * Play the Parts of Your Heroes – Take on the role of different characters as each plays a pivotal role in the battle for Hogwarts. Play as Harry, Hermione, Ron, Ginny, Seamus, Neville, Molly Weasley and Professor McGonagall as they each play their part in the defence of Hogwarts and the destruction of Voldemort. * Epic Battles – Wield the power of accomplished wizards as you duel the most fearsome and formidable characters of the wizarding world. * Fight the Dark forces – Use your magical skills to defeat Death Eaters, Snatchers, and giants intent on destruction. * Stunning Environments – Experience Hogwarts as you've never seen it before.