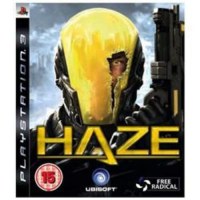 We buy for: £0.05
Sell PS3 Games. Get Cash for Haze. Set in the year 2048 in a world where Governments have outsourced military operations to Private Military Corporations (PMC), you play a newly enlisted soldier seeking fulfillment and thrills by fighting for a good cause. As the leading PMC, Mantel Global Industries offers a high-tech arsenal of vehicles, deadly weaponry, and on top of that a performance enhancing bio-medical support known as Nectar. As a result, Mantel troopers are the most feared by terrorists, dictators, and the corporation's political enemies. Your conflict begins in a war-torn country where you have been sent to fight a vicious rebel faction, the Promise Hand. At first glance, all is well, but things quickly begin to look a little strange… Key Features: * Impeccable FPS credentials: from the developers of the critically-acclaimed TimeSplitters series and the publishers of Far Cry and Ghost Recon Advanced Warfighter. Free Radical and Ubisoft have proven their ability to create innovative platform-defining FPS titles. * Become a Mantel Trooper and fight the merciless guerrillas of the Promise Hand with the most advanced gear, the fastest vehicles, the deadliest weapons – and Nectar, Mantel's battlefield-optimized performance-enhancing medication. * Boost your fighting abilities with Nectar, empowering Mantel troopers with fighting abilities such as Nectar Focus, Nectar Foresight, Nectar Perception and Melee Blast. Using these skills, troopers are able to detect and avoid imminent danger as well as deliver powerful attacks in close quarters. * Mature and compelling storyline. A tightly integrated storyline makes Haze an immersive narrative experience as well as a cutting-edge shooter. * Cutting edge gaming technology featuring the Disparity Rendering System shaping the players' views of the world on and off Nectar. Haze also features an entirely streamed experience with no loading times between levels. * State of the art multiplayer modes. Fire up your console for online battles and choose from a variety of online modes including furious 4 player co-op action!