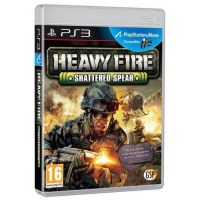 We buy for: £2.53
Sell PS3 Games. Get Cash for Heavy Fire Shattered Spear. An adrenalin-pumping, explosive, on-rails shooter! This best-selling Heavy Fire military action series introduces new game play elements including a multi-directional multi-cover system, sniping, night vision, new and distinct weapons, and new vehicle levels – all catapulting players straight into rapid-fire action. The game also features a new look with an updated graphics engine even hardcore gamers are sure to appreciate. Heavy Fire: Shattered Spear puts you on the front lines of modern warfare with a clear but dangerous objective – prevent nuclear Armageddon! Your mission starts deep behind enemy lines where you must rescue a captured spy who holds the plans to s secret nuclear weapons facility. As the fighting escalates, use your wide selection of weapons including pistols, grenades, machine guns, shotguns, sniper rifles, helicopters, tanks, and the mighty AC-130 to reach the enemy base. Once there, disarm the nuclear missile...before it's too late! Upgrade your equipment and skills to improve the chances of success. Use the on-line leader board to compete with other players for the highest score, or grab three of your friends for 4-player co-operative mode. With more than 60 achievements and awards to collect on Playstation 3, this shooter will have you gunning for more! Features: * Over 60 achievements, awards and trophies to earn on Playstation 3. * Sniping, night vision and new intense vehicle episodes. * Cutting-edge graphics engine for an incredible visual experience. * 4-player co-op mode for intense team-based gameplay . * Multi-directional and multi-cover system for fast run-and-gun gameplay. * New weapons for hardcore gameplay.