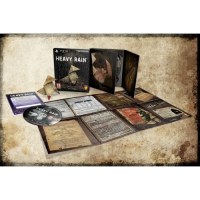 We buy for: £0.75
Sell PS3 Games. Get Cash for Heavy Rain Special Edition. Heavy Rain is a dark, immersive and emotionally-engaging experience; one that expands upon the innovative ideas of 2005's acclaimed 'Fahrenheit' to create a noir-thriller where decisions are charged with importance and actions can have drastic and unforeseen consequences. Breaking with traditional game conventions where necessary, the gameplay is based around story, emotional involvement and the player's decisions and interactions, rather than high-scores, combat and competition. Intuitive gameplay and controls are also fundamental to the experience – ensuring that the game is mature but accessible, and avoiding alienating players with obscure stats and complex interfaces. In 'Heavy Rain' you don't watch the story – you play it. The dynamic narrative unfolds through the players' actions - not cut scenes - and every action has a consequence. The choices you make and the way you interact with other characters have repercussions throughout the storyline. With unprecedented responsibility over the fates of the game's characters, players will find 'Heavy Rain' an emotional experience unlike any other. It dares to tackle subject matter and themes rarely touched upon in video games, making it a genuinely mature game for a new world of adult gamers.