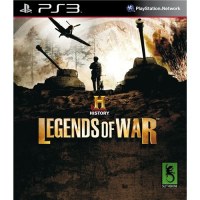 We buy for: £1.32
Sell PS3 Games. Get Cash for History Legends of War. Building on the success of the History Great Battles series History Legends of War is a new and unique turn based strategy game set in World War II. Highly anticipated follow up to History Great Battles Medieval you assume the role of General Patton, commanding the Third U.S. Army from the beaches of France to the city of Berlin. Features: * Lead your forces through a complete campaign composed of 35 challenging missions against the advancing Nazi forces. * Combines 2 different game modes: high-level strategic management (with RPG elements) and a tactical turn-based mode. * Begins one month after the Normandy landings, when the command of the Third U.S. Army is assigned to Patton. Battle through scenarios based on actual historical operations like Operation Cobra, the Siege of Cherbourg and the Chambois Pocket. * Campaign mode composed of 35 Missions across 7 unique Operations. * Varied mission types, including attack, infiltration, defence, escort and sabotage. Unique combination of 2 strategy game mechanics: high-level strategic management and turn-based tactics. * 22 different battlefield maps consisting of 3 different environments: countryside, snow and cities. * 53 different types of units: command infantry, armoured vehicles and aircrafts, special units (including snipers, elite forces and commandos) fighters and bombers.