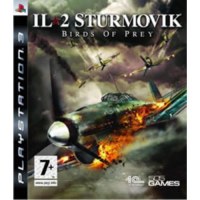 We buy for: £2.53
Sell PS3 Games. Get Cash for IL2 Sturmovik Birds of Prey. IL-2 Sturmovik: Birds Of Prey is based around large-scale aerial combat over the ground-based military operations of World War II. Participate in the war's most famous confrontations piloting fighters, battle planes or heavy bombers through a range of thrilling missions set over stunning landscapes - from the patchwork fields of Southern England to the smoking ruins of Stalingrad, all recreated with amazing detail. As well as advanced environmental visuals IL-2 also boasts an all-new damage effects engine. Players can see real-time damage to the aircraft such as holes in the wings and trail lines during dog fights. * Engage in more 50 thrilling missions from famous historical battles over Eastern and Western Europe and fly historically accurate aircraft including the iconic Spitfire * Choose a difficulty level to match your experience, from adrenaline-fuelled arcade action to realistic simulations * Battle hundreds of enemy aces for control of the skies in intense multiplayer dogfights and bombing sorties * Enjoy detailed visuals including revolutionary real-time damage effects and an atmospheric audio experience featuring a stunning soundtrack by Jeremy Soule