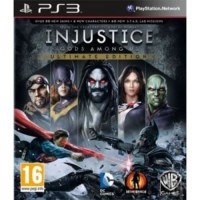 Injustice Gods Among Us Ultimate Edition

We buy for: £2.10
Sell PS3 Games. Get Cash for Injustice Gods Among Us Ultimate Edition. Featuring DC Comics icons such as BATMAN, THE FLASH, HARLEY QUINN, SOLOMON GRUNDY, SUPERMAN AND WONDER WOMAN, the latest title from the award-winning studio presents a deep original story. Heroes and villains will engage in epic battles on a massive scale in a world where the line between good and evil has been blurred. * Destructive Fighter in which the World is a Weapon – Experience epic battles on a massive scale as players control the most powerful beings in the universe in destructible & interactive environments. Destroy elements of the world and use super powers to turn vehicles, buildings and more into powerful weapons. * Uncontainable Battles – Fight through multi-tiered fighting arenas by hurling opponents through buildings and launching them off cliffs. * Robust DC Comics Roster – Engage in epic match-ups with a massive roster of DC Comics heroes and villains, including BATMAN, CYBORG, THE FLASH, HARLEY QUINN, NIGHTWING, SOLOMON GRUNDY, SUPERMAN AND WONDER WOMAN. * Master God-Like Powers – Unleash each character's unique super powers with individual move-sets and environmental interactions. * Original DC Comics Saga Set in Iconic Environments – Experience an authentic DC Comics storyline created in collaboration between NetherRealm Studios, DC Entertainment, and writers Justin Gray and Jimmy Palmiotti. Players will discover and do battle in numerous iconic locales pulled from DC Comics lore.