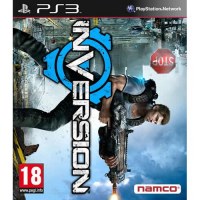 We buy for: £1.32
Sell PS3 Games. Get Cash for Inversion. Take on the role of a young father and husband, Davis Russel, who finds himself thrust into war when his peaceful city is invaded by an unknown enemy. With his daughter missing and conventional weapons and tactics all but useless, this ordinary cop and his partner Leo Delgado will rise up to heed the call of duty, master the fundamental forces of gravity and save the world. Features: * Multiplayer Options: o Play through the compelling story on your own or play with others in either co-op or competitive modes. o Battle with up to 16 friends in gravity defying multiplayer maps and modes. * Breakthrough Gravity-Defying Gameplay: o Learn to maneuver and shoot in an ever-changing state of global gravity, including weightless gameplay in zero gravity. o Control gravitational forces using your Grav link device to either increase or decrease the amount of gravity on a given target. o Command gravity to crush objects in your way, fl oat enemies into range or even pick up cars to use them as mobile cover.