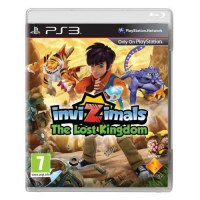 We buy for: £1.05
Sell PS3 Games. Get Cash for Invizimals The Lost Kingdom. For fans of action adventure, Invizimals: The Lost Kingdom is a brand new game which allows young explorers to enter the world of the Invizimals for the very first time. Developed exclusively for the PS3 by Magenta Software, players will discover The Lost Kingdom through the eyes of Hiro, a young explorer who uncovers a magical portal that teleports you into a fantastical new world. With the opportunity to transform into one of your all-time favourite Invizimals, players must use the Invizimals unique abilities to defeat a powerful robot army that is attacking The Lost Kingdom and solve puzzles as you journey across six exotic worlds by land, air and sea. Cross-play functionality – Whether you're helping out the Invizimals on the PS Vita version or exploring their magical world on the PS3, you can still link up with friends and transfer your evolving characters between the two platforms, PS Vita and PS3. Have up to four players battle it out in the multiplayer mode and send your PS Vita Invizimals to the PS3 to take part in the action. When you're done, transfer them back to your PS Vita, and use them to battle with your friends.