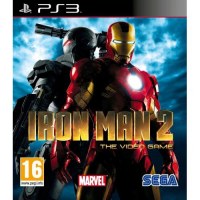 We buy for: £2.10
Sell PS3 Games. Get Cash for Iron Man 2. This brand-new tale will take gamers deeper into the Iron Man comic world, adding to the excitement of the upcoming Marvel and Paramount Studios film. Iron Man 2 exclusively offers fans a chance to play against enemies such as the unforgettable Crimson Dynamo, not found in the film. Iron Man 2's original plotline sees Tony Stark gifting the world with new technology in order to make it a better place. However, his philanthropic nature isn't enough to keep the bad guys away as Iron Man's enemies have devious designs on the technology. Ultimately, Tony Stark/Iron Man will be forced to fight in epic battles, face huge enemies and in the end, the fate of the world will be left in his powerful hands where he will battle to save it from destruction. Iron Man 2 takes players into a richer and more interactive Iron Man world. The game allows players to take full advantage of the Iron Man suit as they battle through futuristic environments inspired by the movie and comic book universe. These environments will also offer a new level of destructibility, making each encounter with enemies a more exciting and intense experience. Also new to the game are some powerful hand-to-hand combat styles one of which is kung fu. Iron Man 2 has taken fan feedback into consideration and will have a redesigned control scheme, making it fun and accessible for gamers to feel the power and strength of Iron Man.