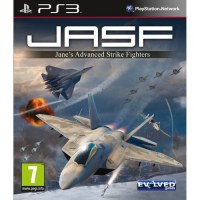 We buy for: £13.04
Sell PS3 Games. Get Cash for Janes Advanced Strike Fighters. Jane's Advance Strike Fighters is set in the fictional country of Azbaristan. The once great nation has been torn apart by a decade of civil war. The ten year war resulted in huge territorial gains for the Northern Peoples Republicand their controlling political party. This gave them control of almost the entire country, except the oil-rich province in the South. The southern Azbaristan Democratic Front has only managed to hold off the North with the aid of the West, which supplies military and logistical aid to the tiny state in return for oil exports. Players will assume the role of squadron leader Razor and lead the fight to reunify Azbaristan and protect the West's vital interests. J.A.S.F is an intense modern flight sim featuring 16 epic story based missions that will take air combat to the next level. Engage enemies using 30 authentic licensed fighters as you battle over expansive battlefields. Features: * Singleplayer and co-op (2-4 players) campaign with 16 story-driven missions. * Set in the fictional middle-east country of Azbaristan, players are part of an American fighter squadron in the middle of a civil war. * 30 officially licensed fighter jets, recreated for the game in full detail. * Theatre of war of. 65,000 square kilometres and varied areas, including cities, mountains & deserts. * Multiplayer mode for up to 16 players.