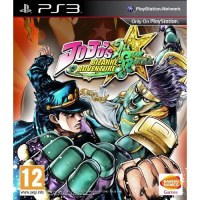 We buy for: £37.24
Sell PS3 Games. Get Cash for JoJo's Bizarre Adventure All Star Battle. With Jojo's Bizarre Adventure: All Star Battle, gamers will get a chance to experience an action/fighting game following the authentic Hirohiko Araki manga! This is the story of the Joestar family, and their battles against bizarre enemies. Jonathan Joestar's battle against the vampire Dio Brando starts it all, and it continues into roughly each second generation of Joestars through all parts of the story. Since its first appearance in Weekly Shonen Jump in 1987, Jojo's Bizarre Adventure manga has sold more than 70 million copies around the world; it is also the second longest running Shueisha manga. JoJo's Bizarre Adventure counts the story of Jonathan Joestar's cursed family; the manga covers the adventures of several generations and their Nemesis; each part of the series focuses on a descendant and has its fair share of belligerents. In order to keep this game within Jojo's Bizarre Adventure spirit, developers included plenty of JoJo-esque features (Battle Styles, Heart Heat Gauge etc.). Fans will fight with characters coming from all of 8 Jojo's Bizarre Adventure chapters. Stylish and colourful battles against some of the most famous bosses such as Dio Brando, Enrico Pucci and much more await players. This new game opens the door to eye-popping fights in beautifully drawn and animated places from Jojo's Bizzare Adventure universe! Features: * Story: Covers original manga from 1st chapter to the latest 8th chapter. * Characters: 41 in total - 9 via DLCs. * Battle Style: 5 Different types: Ripple, Vampire, Stand, Riding and Mode. * Stage Gimmicks: During battle object can appear and reach the players. * Stylish Move: Perfect timed guard = evade with a JoJo pose. * Heart Heat Attack (HHA)/Great Heat Attack (GHA): Powerful attacks specific to each character that consumes Heart Heat Gauge. * Easy Beat: Simple combo with easy control. * Online Campaign: Sustain product life cycle with money to earn and items to buy.