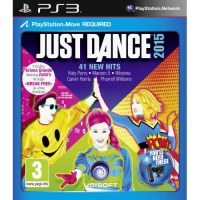 We buy for: £1.76
Sell PS3 Games. Get Cash for Just Dance 2015. There are more than 100 million Just Dance players around the world, and in Just Dance 2015 the community is as important as ever with the introduction of the all-new Community Remix feature. The feature allows players to record themselves dancing to songs from artists like Ellie Goulding, Pharrell Williams, and Calvin Harris and share in the game. The community then votes on their favourites, which the development team will use to create remixed gameplay and ultimately bring fan footage into the game for millions of fans to dance against. Ubisoft is bringing the players into the actual game this year. Fan-favourite features including the massive multiplayer mode World Dance Floor, video snippet creator Autodance, and sing-along Karaoke feature are all back and revamped for the new game. With more than 40 tracks, there's quite literally something for everyone. Get "Happy" with Pharrell Williams, "Walk This Way" with Run-DMC and Aerosmith, or try "Holding Out for a Hero" with Bonnie Tyler's 1980s power anthem. Whether it's pop, hip-hop, or rock you're looking for, check out a selection of Just Dance 2015 tracks: * "Happy" by Pharrell Williams. * "Problem" by Ariana Grande ft. Iggy Azalea. * "Walk This Way" by Run-DMC and Aerosmith. * "Summer" by Calvin Harris. * "Holding Out for a Hero" by Bonnie Tyler. * "Only You (And You Alone)" by The Platters. * "The Fox" by Ylvis. * "I Love It" by Icona Pop ft. Charli XCX. * "Burn" by Ellie Goulding. * "Love Me Again" by John Newman. * "Tetris" by Dancing Bros.