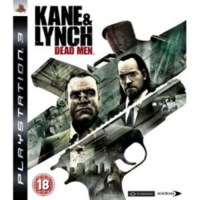 We buy for: £0.05
Sell PS3 Games. Get Cash for Kane & Lynch Dead Men. Kane & Lynch: Dead Men is a dark and gritty tale of two men bound by circumstance as they wait on death row for their final sentence. One is a flawed mercenary, the other a medicated psychopath. The two are forced to embark on a violent and chaotic journey, hating each other every step of the way. Kane & Lynch: Dead Men is a story-driven, fully co-operative third-person action shooter title, with intuitive crew mechanics, heavily populated destructible real-world scenarios, a volatile partnership and brutal attitude.