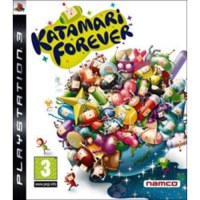 We buy for: £13.59
Sell PS3 Games. Get Cash for Katamari Forever. The King of All Cosmos has bumped his head into the mysterious Dark Planet! He has lost his memory and has become unconscious... To replace the King, the Prince and his Cousins created RoboKing, but it went out of control and destroyed all the stars in the Cosmos. To clean up the mess made by RoboKing and bring back the King's memories, the Prince and his Cousins roll their Katamaris in the real world and in the King's dream world. * Emotion System - Game music, visuals and controls will change according to the King's mood (gameplay dependent). * New Characters –3 new members in the Katamari Damacy Family * Prince Hop – A new action performed by using the SIXAXIS controller. * New Visuals – Featuring visuals whilst preserving the classic Katamari look. * New Additional Game Modes – Featuring new gameplay content and volume.