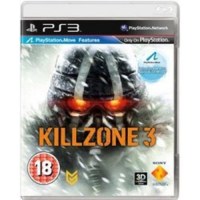 We buy for: £0.35
Sell PS3 Games. Get Cash for Killzone 3. Killzone 3 picks up where its predecessor left off and it's a much grander experience in terms of scale and ambition. There will be more variety, more enemy types, massive environments and a broader vision of the planet Helghan and its many terrains. Developed by Guerrilla Games, a wholly owned subsidiary of Sony Computer Entertainment Europe, Killzone 3 is the latest title in the Killzone franchise, bringing the most robust first-person shooter experience exclusively for the PS3. Following on the heels of the highly acclaimed Killzone 2, players will once again face the hostile Helghast army, battling overwhelming odds in the fight for human survival. Killzone 3 delivers the definitive cinematic sci-fi war experience with an immersive single-player campaign as well as full featured multiplayer action in the war against the Helghast. Players will be tasked with utilizing a host of new weapons and vehicles in the battle for human survival. Helghast variety is now greater than ever, with players facing jetpack troopers as well as enemies wielding weapons of mass destruction. Killzone 3 thoroughly explores the planet Helghan, showcasing a wide breadth of destructible environments and stunningly detailed scenery. Additionally, players will be tasked with utilizing a host of new weapons and vehicles in the war to stop the Helghast. Featuring an extensive single-player campaign and thrilling multi-player mode, Killzone 3 delivers a host of new gameplay elements and an intense storyline that will once again drive gamers to join the ranks of the ISA and fight the Helghast.