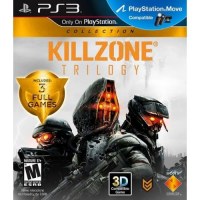 We buy for: £22.39
Sell PS3 Games. Get Cash for Killzone Trilogy. Making its debut on PS3, the first title in the Killzone trilogy is set in an era of space colonization. Gamers take control of Jan Templar, Interplanetary Strategic Alliance (ISA) Captain, who is desperately trying to repel the Helghast invasion of Vekta. Re-mastered with stunning HD visuals, Killzone is the game that started it all and built an army of fans for this nail-biting trilogy. Keep the adrenaline pumping and experience the exhilaration and brutality of war as the ISA fight for control – then fight for survival – on the Helghast home world in Killzone 2 and Killzone 3. For an added layer of action, go head-to-head with friends in the advanced multiplayer warfare in the two sequels' celebrated online modes. Adding more thrills and excitement to the overall Killzone Trilogy package, gamers will also be able to get their hands on the multiplayer map packs launched for Killzone 2 and Killzone 3.