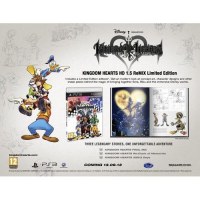 We buy for: £5.01
Sell PS3 Games. Get Cash for Kingdom Hearts HD 1.5 ReMIX Limited Edition. Fully remastered in HD, KINGDOM HEARTS HD 1.5 ReMIX is a stunning collection of the critically acclaimed KINGDOM HEARTS FINAL MIX and KINGDOM HEARTS Re:Chain of Memories, never previously available in Europe and PAL territories. In addition, the collection will feature HD cinematic story videos from KINGDOM HEARTS 358/2 Days, enhanced gameplay mechanics and PlayStation 3 system trophies. Players can now relive the origins of the celebrated franchise with Sora, Riku and the colourful cast of Disney characters, including Mickey, Donald and Goofy. Features: * Enter an exciting new universe, where over 100 classic Disney characters co- exist with familiar Final Fantasy stars. * Adventure through beautiful worlds based on classic Disney films like Aladdin, Tarzan, Hercules & Alice In Wonderland. * Real-time battle system that incorporates innovative new elements with traditional RPG gameplay . * Wield the power of the Keyblade and use Magic along your quest, through the use of elemental attacks and Summoning.