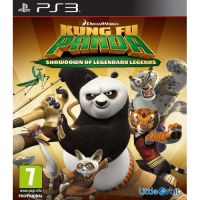 We buy for: £3.05
Sell PS3 Games. Get Cash for Kung Fu Panda Showdown of Legendary Legends. It is an age of Kung Fu heroes, warriors, and best of all, LEGENDARY LEGENDS! Fight it out alongside Po, Tigress, Monkey, Tai Lung, Master Shifu, and all of your favourite Kung Fu Panda characters to compete in the Showdown of Legendary Legends. Up to four players brawl in iconic locations throughout the Valley of Peace and beyond. Compete in an epic tournament where all Kung Fu warriors contend for honour and glory. Kung Fu Panda: Showdown of Legendary Legends will have a wide assortment of modes available for single and multiplayer. All multiplayer modes will include options for both local and online play. Features: * Fight in an action-packed brawler competition set in the Kung Fu Panda universe - a Showdown where all fighters must use their unique skills to compete for honour and glory. * Team up with dozens of playable characters - 24 popular heroes and villains from the Kung Fu Panda films and the Legends of Awesomeness TV series. * Battle in 3D environments straight from Kung Fu Panda films - 15 locations available. * Basic levels - keep your character from being knocked off a platform or surface. * Moving levels - areas are in constant motion throughout the fight. * Danger levels - players must fight the environment as well as their opponents. Platforms may crumble, change, collapse or have features (i.e., cannons) that may knock players out of the world. * Challenge friends and family in multiple Game Modes. * Single-player modes: Practice, Tutorial and Tournament. * Multiplayer modes: Versus, Team Battle, Rank Matches, and Non-Ranked Matches playable locally and online. * Leaderboards: Show the rankings of top players and the player's position. * Find your unique fighting style - every character in the game has special attacks, unique moves and an Awesome Attack. * Power up with companion characters - picking up a companion item will summon a companion character. The companion will perform a special attack against an opponent before disappearing.