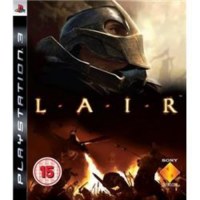 We buy for: £0.25
Sell PS3 Games. Get Cash for Lair. In a world ravaged by endless conflict and natural disaster, a call for peace turns into a bloodbath of betrayal and deceit in Lair for the PLAYSTATION 3 (PS3 ) computer entertainment system. Playing as a warrior named Rohn who rides a voracious dragon trained for deadly aerial and ground combat, gamers must defeat the war-hungry Mokai to save the Asylian civilization. Together, Rohn and his dragon will attempt to change the destiny of a world on the brink of extinction by scorching, clawing and smashing through thousands of enemies and their war-trained beasts. * Over 60 minutes of beautifully rendered cinematics and professional voice-overs. * Lair weaves the tale of a heroic struggle in a world of savage beasts as civilization repels the onslaught of an unrelenting army. * Incredible 1080p Graphics: With amazing 30-frames-per-second high-definition visuals, Lair is one of the first 1080p native resolution games, offering jaw-dropping, lifelike graphics. * Intense Aerial and Ground Combat: Fierce ground and air warfare catapults players into epic fights against other dragons, beasts, warships and armies comprised of thousands of armored soldiers. * Gigantic Creature Battles: Face off against enormous beasts of massive scale, including a huge sea serpent that measures over a mile long! * Full SIXAXIS Control: Supporting full tilt control and gesture recognition,the SIXAXIS wireless controller allows for 180-degree turns, dives and attacks all through intuitive motion-based controls. * Mission-based Gameplay: Smooth,seamless gameplay weaves missions and story tightly together and allows influence over the battles as a whole through destroying legions of soldiers