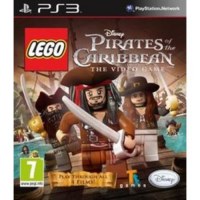 Lego Pirates of the Caribbean

We buy for: £2.10
Sell PS3 Games. Get Cash for Lego Pirates of the Caribbean. LEGO Pirates of the Caribbean: The Video Game is an action-adventure game that brings the Pirates of the Caribbean world and all its colourful characters to life in LEGO Brick form. Players will experience all the memorable scenes from the first three films, as well as those in the upcoming fourth film, "Pirates of the Caribbean: On Stranger Tides," in the humorous and quirky LEGO Video Games style. Features: Exploration: Players will explore familiar locations filled with interactive LEGO Objects and encounter more than 70 memorable and new characters while making their way through more than 20 levels. Combat: The LEGO Caribbean is full of danger! Intense sword fighting moves give the LEGO Minifigure a brand new pirate flavour. Unforgettable Cut Scenes: Some of your favourite scenes from the Pirates of the Caribbean films are re-rendered with LEGO Minifigures, in the humorous style synonymous with LEGO Video Games. Puzzles: Players will need all their pirate cunning to find the hidden LEGO Treasures and discover the game's many secrets. Two-Player Co-op: Players can join a friend or family member in the same room for two-player "drop-in/drop-out" cooperative action. Freeplay: Building a collection of characters throughout the game, players can then use their distinctive abilities to gain access to previously unavailable areas.