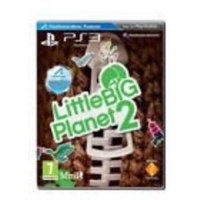 We buy for: £1.32
Sell PS3 Games. Get Cash for Little Big Planet 2 Collectors Edition. Sackboy is back and he wants your help making the best game ever. The last LittleBigPlanet allowed you to create and customise your very own 2D platform game but this sequel blows things wide open, so that you can make almost any kind of game you like. As long as it's viewed in 2D you'll be able to construct a game however you like, creating racing, puzzle and role-playing adventures using all of the game's new tools. You'll even be able to film and playback your own cut scenes and record your own sound effects. When you're done you can upload your creation online and let other people see your work - as well as download whatever they've made. Of course the game comes with plenty of its own built-in levels and games, with plenty to see and do even if you never create anything yourself. But where would be the fun in that? Key Features * D.I.Y. Gaming: The most versatile and easy to use game creation tool ever seen lets anyone create their own platform, puzzle, racing and role-playing games. * Gamebook: Become part of the online community and browse other people's creations, see how often yours has been downloaded and play four-player matches together. * Story Mode: Enjoy more than 40 new ready-made levels as you battle enemies across a wide range of game genres and themes from "Techno Renaissance" to "Hand-made Arcade". * Inspect Gadgets: Make use of all new gadgets such as the grapple hook, power gloves and the "Creatinator" that sees Sackboy spit out whatever you decide. * A Bigger Toolbox: Powerful new creation tools including customisable heads-up displays and artificially intelligent Sackbots that you can program and control.