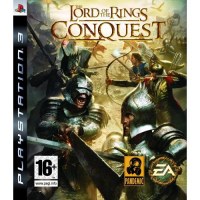 Lord of the Rings Conquest

We buy for: £2.10
Sell PS3 Games. Get Cash for Lord of the Rings Conquest. In this exciting, action strategy game, players fight on the side of both Good and Evil in all the biggest battles from The Lord of the Rings movies. The Battlefront format allows them to switch between characters at will, to suit the circumstance or their style, reliving – and even reinventing – the chaotic and engrossing conflicts from the films as they choose how best to tackle their objectives and defeat their enemies. In online multiplayer, gamers can choose to be Evil from the outset. Key Features: * Play as Evil characters in a brand new, Evil' campaign. Battle through scenarios after Frodo failed to destroy the One Ring; it's good to be bad! * Acclaimed Battlefront gameplay in a fantasy setting allows players to choose the way they fight, as Warrior, Archer, Mage or Scout in melee and ranged combat * Battle online, with up to 16 players in instant action mode or 2-players in a co-op campaign or offline with 2-4 players* in split-screen. * Local multiplayer— split-screen with up to 4 players competitively or 2 player co-op * A massive cast of characters & weapons adds great depth to the gameplay: Heroes, Wargs, Ents, Oliphaunts, Cave-trolls, the Balrog, Nazgul, ballistae, and more!