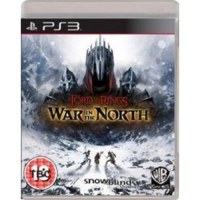 Lord of the Rings War in the North

We buy for: £3.05
Sell PS3 Games. Get Cash for Lord of the Rings War in the North. The Lord of the Rings: War in the North is a co-op Action RPG that immerses you and your friends in a brutal new chapter in the War of the Ring. Snowblind Studios is in the unique position of drawing inspiration from both the literary and film rights to world of Middle-earth, allowing players to bloody their axes on a wide range of deadly enemies and traverse both established and never-before-seen locations. The result is a journey that is both epic and intimate, familiar yet unexpected. Action Meets RPG: Intense, visceral, and satisfying combat. Rich, layered, and impactful character progression. In War in the North, you get both. Find and equip the best loot, upgrade your hero using a wide range of skills and items, and feel the intense satisfaction of rushing into real-time battles with friends by your side. Fight through the brutal realities of the war on all fronts that were brought to life in the lore. Immerse yourself and make your own mark on Middle-earth.