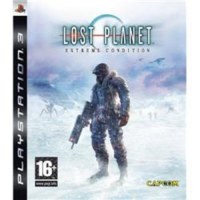 We buy for: £0.75
Sell PS3 Games. Get Cash for Lost Planet Extreme Condition. Combining a gripping single player campaign and intense multiplayer modes with support for up to 16 players online, 'Lost Planet: Extreme Condition' is an epic gaming masterpiece. Enormous world maps unfold as players battle hostile creatures in blistering weather conditions across vast snow fields and blazing volcanic areas either on foot or in armed, robotic Vital Suits. 'Lost Planet: Extreme Condition' for the PLAYSTATION 3 is available with a number of specific features not previously available in retail editions of the console version. These include 16 diverse multiplayer maps right out of the box and additional playable characters each with their own unique abilities. Key Features Frenetic action - 'Lost Planet' is a fast-paced third-person shooter with all the depth, intrigue and intensity of a science fiction classic. Connect to gamers around the world - via PLAYSTATION Network and participate in a variety of cooperative and versus battles with up to 16 players. Elimination - It's every snow pirate for themselves in this death match mode where the victorious are rewarded for the most points earned. Team Elimination - You're only as good as your teammates so strategy and cooperation is key in eliminating the opposing side. Post Grab - Teams are tasked with capturing and holding as many Posts as possible. Fugitive - One player is assigned as the “Fugitive”, and he or she will earn points for various actions (staying alive, killing enemies, capturing Posts). Dying deducts points and winning is determined when a maximum total is reached or when the score ticks down to zero. Foot and Vital Suit based gameplay - Command highly powered VS and weapons not only to help players traverse the treacherous terrain, but to eliminate enemies that lie ahead. Strategically switch between VS and on foot gameplay to best face each situation and challenge. Vast environments - Snowstorms, arctic winds, towering buildings and mountains of ice are all stunningly realized as battles occur above and below ground, creating a truly immersive and cinematic event of epic proportions. A premier team of developers - The creators of the critically acclaimed 'Onimusha' and 'Devil May Cry' series have come together to create the expansive world of 'Lost Planet'.