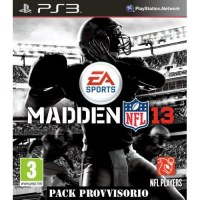 We buy for: £0.05
Sell PS3 Games. Get Cash for Madden NFL 13. With physics you can feel, Madden NFL 13 delivers Next Generation gameplay today. Powered by the all-new Infinity Engine, true player impact and authentic momentum transfer ensure that no two plays ever look or feel the same. Madden NFL 13 revolutionizes the way sports video game career modes are played with Connected Careers—a completely new and fully connected universe defined by deep gameplay, unique storylines and social integration. With cutting-edge Infinity Engine technology, revolutionary Connected Careers and a complete audio and visual overhaul that delivers best in class presentation, Madden NFL 13 is undoubtedly the greatest entry in the franchise's celebrated history. Features: Playbooks Presentation – NFL broadcasts are some of the most impressive in the world of sports, and that attention to detail is apparent in Madden NFL 13. From the moment players start the game and see the completely redesigned opening, to the 3-D booth showcasing new commentators Jim Nantz and Phil Simms, Madden NFL13 provides the most dynamic, authentic presentation yet. On the field, HDR and multi-vector lighting tracks the position of the sun after every play, and motion blur gives a true sense of speed. Also, don't forget those brand new Nike uniforms and gear, which debut in their full digital glory in Madden NFL 13. Gameplay – An enhanced passing system opens up the game like never before with changes to the way quarterbacks, receivers and defenders react to the ball. On top of all that the new Infinity Engine completely redefines how players interact in Madden NFL 13. Offence: The new Total Control Passing mechanic lets players lead receivers into open space and put the ball exactly where they want it to go. Also, revamped passing trajectories, quarterback dropbacks, and play action improvements make airing out the ball more appealing than ever. Defence: Defensive coverage AI has been completely rewritten thanks to the new read and react defensive AI. Conversely, defenders now disguise their coverage so users won't know if the defence is in man or zone until the snap, creating a chess match between the offense and defence.