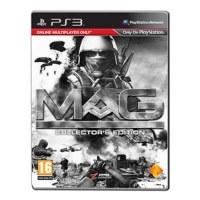 We buy for: £1.05
Sell PS3 Games. Get Cash for MAG Collectors Edition. If you think you've seen all that online shooters have to offer you haven't experienced MAG. Instead of just a dozen or so people in small scale confrontations this battlefield is filled with 256 other players, all working together in their own 8-man squads. MAG is short for "Massive Action Game" Take to the skies in helicopters and jets or sit back and call in the airstrikes Being a team player is the best way to get ahead in MAG Winning the war means taking control of key areas on the huge battlefield maps Although you can play the game as a standard first person shooter working together with your teammates is the only way to succeed, with each squad pursuing different tactics and objects - from directing air strikes, to taking part in parachute drops and overrunning enemy gun emplacements. As you gain more experience in the game your character's abilities and weapons will improve and evolve, with the best players earning the right to command more and more people and take a greater strategic role in the wider conflict. This is all out virtual war on a scale that has never been possible before on a home console. Key Features * 256 reasons: The largest scale online shooter ever seen on a console, with 256 people playing across maps in gigantic mile-wide levels. * Brothers in arms: Become the leader of your own squad of 8 players, then work your way up to platoon and company commander as you gain more and more control of the battlefield. * Veteran soldier: Earn experience in battle (and by following orders) and upgrade your character, your weapons and your ability to call in airstrikes and artillery. * Top gun: Take command of a range of different vehicles, including tanks, armoured personnel carriers and aircraft. * The big three: Join one of three factions, from the U.S. army style Valor group to the more unorthodox S.V.E.R and the futuristic Raven team.