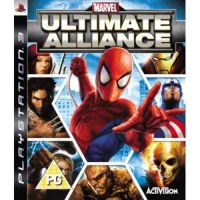 We buy for: £5.01
Sell PS3 Games. Get Cash for Marvel Ultimate Alliance. * Experience the full scale of the Marvel universe with a combined cast of over 140 popular comic book characters. * Players create, customize and control their ultimate four-person strike team, selecting from an initial roster of 20 playable Super Heroes * Spider-Man, Wolverine, The Thing, Captain America, Elektra and Thor - and battle notorious Super Villains including Dr. Doom, Galactus and countless others. * In addition to the epic single-player storyline, players can also battle the world's most evil Super Villains alongside friends in both on and offline cooperative story modes. * Combat, Combat, and More Combat - With new and dynamic combat capabilities, Super Heroes can now fight while airborne, on the ground, and even submerged underwater MARVEL ULTIMATE ALLIANCE Marvel: Ultimate Alliance is an all-new action/RPG where players create their Marvel dream team from the largest roster of Super Heroes ever in an epic quest that will determine the fate of Earth and the Marvel universe. For decades, Earth's Super Heroes have opposed evil in their own cities, and on their own terms. But now, Dr. Doom and a newly reformed Masters of Evil - the greatest collection of Super Villains ever assembled - have plans for world domination, and the heroes must band together to defeat them. Playing as some of the most revered Marvel characters, gamers will embark on a dangerous journey across exotic terrain and well-known comic book locations like Atlantis, the Shield Heli-Carrier and the Skrull home world in an attempt to defy the world's most notorious Super Villains. Created by Raven Software, Marvel: Ultimate Alliance lets players control the most powerful Super Hero alliance the world has ever known.