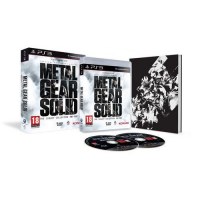 We buy for: £23.49
Sell PS3 Games. Get Cash for Metal Gear Solid The Legacy Collection 1987 - 2012. METAL GEAR SOLID: THE LEGACY COLLECTION celebrates the seminal work of Hideo Kojima, Japan's master game creator, and creator of the stealth action game genre. Mr Kojima's vision and art for story-telling has seen the METAL GEAR SOLID series become a global phenomenon. The player controls a secret agent from an elite Special Forces unit who is sent on solo stealth missions through enemy installations, vast jungles, and the thick of battle. Mixing action, stealth, and set within a stunning universe inhabited by a wide range of sympathetic and utterly evil villains, METAL GEAR SOLID: THE LEGACY COLLECTION marks a perfect chance to reacquaint with, or sample for the first time, the METAL GEAR SOLID universe ahead of the release of METAL GEAR SOLID V: THE PHANTOM PAIN.