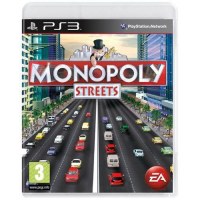 We buy for: £2.10
Sell PS3 Games. Get Cash for Monopoly Streets. To celebrate its 75th anniversary, the world of Monopoly comes to life through a living, breathing city that you can build, own, and monopolize. MONOPOLY STREETS has everything you love about the board game, presented as a street level tour of Mr. Monopoly's fully animated world. Engage in a head-to-head race to evolve the surrounding city, accumulate the most wealth, and own it all! Play against your friends live and online or be matched up against players with similar skills from around the world! New features, such as property auctions, add new excitement to the classic play. From the cheap houses to the luxurious hotels, there is excitement around every corner in this remade classic. Key Features: * The board comes alive—See your city grow from the ground up as you buy and trade classic Monopoly properties! From fun animations of the classic tokens to the ritzy hotel you can build, experience Monopoly in a whole new and interactive way * Extensive multiplayer options—Play with your friends live and online or be matched with someone of similar skills from around the world via PSN * Streamlined play—An extensive house rules system allows you to play a game in however much time you have * Auction properties—Add competition to the game by auctioning properties with your friends. See if you can snatch a great deal or break someone's bank! * Play on multiple boards including “Monopoly City” “Monument City” and Classic Boards as well