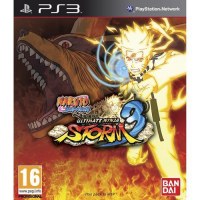 We buy for: £1.76
Sell PS3 Games. Get Cash for Naruto Shippuden: Ultimate Ninja Storm 3. Naruto Shippuden: Ultimate Ninja Storm 3 features the most extensive character roster of any game so far in the series, letting fans engage with a huge number of their favourite personalities from the Naruto universe, be they friend or foe. In story mode, players will be thrown into a series of thrilling adventures set in the village of Konoha, while the game’s electrifying fights will be punctuated with massive scale boss battles, including a fearsome confrontation with the gargantuan Nine-Tails. Features: • Ninja war: Naruto’s longest and final act is recreated through an absolutely massive story mode including Naruto’s most impressive and powerful ninjas from all time. • Character line up: The most powerful ninjas from all time recreated and added to the already huge Storm G characters for the most impressive and numerous line up ever. • Dramatic boss battles: Army v/s Army, choice driven battles, new special battles, in a relentless sequence of boss battles with legendary opponents. • Total immersion: Revisited gameplay fully mixing gameplay, drama and video. • Mature content: Naruto finally rendered as in the anime, with wounds, blood and (a few) dismemberment. • Endless combinations: Jutsus and ultimate jutsus change with the support to create unique combinations. • Support characters: always on the field for higher immersion and more interactions. • Adventure outline: Better rendered, more interactive, scalable and adding never-before-seen areas.