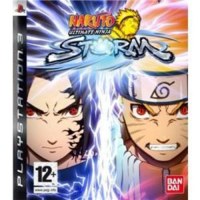 We buy for: £1.32
Sell PS3 Games. Get Cash for Naruto Ultimate Ninja Storm. Evolving the head-to-head fighting action of the Ultimate Ninja series, NARUTO: Ultimate Ninja STORM allows players to battle in full 3D across massive environments. Players will unleash powerful jutsu attacks, perform acrobatic evasive maneuvers and even run up walls and over water as they pursue their opponent for ninja supremacy. Players will be able to customize their character's fighting style and recruit up to two support characters to put their own stamp on the action. Each character in the game is capable of unleashing powerful Awakening abilities under certain gameplay conditions, offering new traits and talents to the game's impressive ninja roster of 25 popular characters from the animated series. NARUTO: Ultimate Ninja STORM supports head-to-head multiplayer fighting for up to two players. * Experience Jaw-Dropping Cinematic Quality HD Graphics: Witness the cinema-quality animation comes to life in high definition. The line between Naruto animation and game graphics will truly disappear! * Roam Freely On Dynamic Multi-Dimensional Battle Grounds: Prepare to battle on robust, multi-dimensional battle grounds. Take advantage of the unique characteristics of each battle field! Battle is no longer limited to flat ground surfaces. * Unleash Your Ninja Dream Team: Form your own three-man dream squad to battle your opponents! Unleash your allies to defend you in battle, or order them to perform cooperative attacks against your opponents! * Discover A Brand New Mission Based Adventure Mode: Challenge a total of 100 compelling missions in Ultimate Mission Mode and experience the original animated TV series storyline up through the Sasuke Retrieval Arc! * Unleash Massive Secret Techniques on An Unprecedented Scale: Using the power of the PLAYSTATION®3 computer entertainment system, you can now destroy your enemies with bigger, meaner, stronger and more cinematic secret techniques than ever before! * Master 25 Fully Transformable Warriors: Behold your characters transforming into powerful superior warriors in battle! All characters will possess amazing power that will expand the very scale of a battle to the next level!