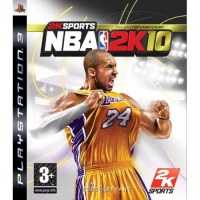 We buy for: £1.05
Sell PS3 Games. Get Cash for NBA 2K10. NBA 2K10 is raising the bar again with another Championship season. NBA 2K9, the 1 selling and 1 rated NBA videogame, set the standard for all basketball videogames, and NBA 2K10 surpasses that by delivering an even better basketball experience this year with all-new gameplay components, out-of-this-world graphics, even more realistic Signature Style animations and all-new presentation elements - this season you won't just play the NBA, you'll take over! Features * Signature Play: Signature Play pulls together all of NBA 2K's player Signature Styles and adds in all-new Signature Tendencies and facial expressions, creating NBA 2K10 teams that play and react like their real-life counterparts for an unbelievably realistic NBA experience. * New Intuitive Controls: All-new easy-to-use game controls allow you to pull amazing offensive and defensive moves that allow you to shadow your opponent's every move, deny position off-ball, and even select how you want to contest shots. * Phenomenal Graphical Updates: NBA 2K10 is visually more impressive with a clarity rarely seen in a basketball videgame. It's just like watching the real thing!