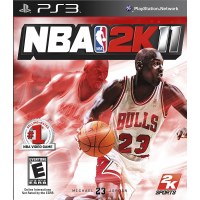 We buy for: £0.25
Sell PS3 Games. Get Cash for NBA 2K11. The latest instalment in the best selling, and highest rated NBA videogame series, NBA 2K11 is the best way to plug into the NBA culture. It's the most fun, authentic NBA videogame experience and is for any sports fan with that competitive fire who wants to play the best NBA simulation on the market. It's the NBA series that everyone is playing from the most elite NBA athletes and superstars to local court gym rats. Featuring Michael Jordan as this year's cover athlete, and several new gameplay modes and updates, NBA 2K11 continues its trailblazing reputation of weaving both emerging and well-established musical acts into the basketball mix. Building on the momentum from NBA 2K10, NBA 2K11 delivers the best basketball videogame experience ever with enhanced gameplay, AI presentation, visuals, audio and online activity. Complementing the appearance of the series' greatest cover athlete to date is the biggest and best soundtrack in 2K history, offering an eclectic mix of upcoming breakout bands and highly acclaimed artists. The soundtrack will sharpen this year's greatest basketball simulation ever with an extensive collection of 29 tracks from artists that tap into the energy, hustle and excitement of the NBA.