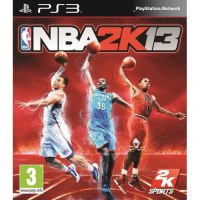 We buy for: £0.35
Sell PS3 Games. Get Cash for NBA 2K13. NBA 2K13 is the latest instalment in the best-selling and highly rated NBA videogame series. NBA 2K13 is the best way to plug into NBA culture. It's the most fun, authentic NBA videogame experience and is for any sports fan with that competitive fire who wants to play the best NBA simulation on the market. NBA 2K13 All-Star Bonus Content: * Four Additional Game Modes: Bundled together for the first time ever, players can participate in an all-new Sprite Slam Dunk Contest, Three-Point Contest, the Rising Stars Challenge game and the NBA All-Star Game. * Sprite Slam Dunk Contest: New, immersive, pick-up-and-play mechanics give gamers more control than ever before. Take to the air and unleash a series of button combinations to complete devastating slam dunks. * Past vs. Present: Who is the better dunker - Michael Jordan or Blake Griffin? Who is the more cold-blooded shooter from outside - Derrick Rose or Kevin Durant? These questions will be answered in the NBA 2K13 All-Star downloadable content. Match the stars of today against the game's greatest legends in both the Sprite Slam Dunk Contest and Three-Point Contest modes. * Rising Stars Challenge: Compete with the future stars of the NBA in this mode featuring NBA rookies and sophomores. * All-Star Game: It's East vs. West in this midseason battle for conference bragging rights. * Dynamic Updates: Rosters for the Rising Stars Challenge and All-Star Game will dynamically update to the 2013 rosters once the participants are announced.