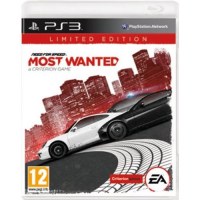 We buy for: £1.05
Sell PS3 Games. Get Cash for Need for Speed Most Wanted Limited Edition. To be Most Wanted, you'll need to outrun the cops, outdrive your friends, and outsmart your rivals. With a relentless police force gunning to take you down, you'll need to make split second decisions. Use the open world to your advantage to find hiding spots, hit jumps and earn new vehicles to keep you one step ahead. In true Criterion Games fashion, your friends are at the heart of your experience. In an open world with no menus or lobbies, you'll be able to instantly challenge your friends and prove your driving skill in a variety of seamless multiplayer events. Your rivals will do everything they can to stop you from getting to the top. In this world, there can only be one Most Wanted. LIMITED EDITION: Pre-order Need for Speed Most Wanted to guarantee your Limited Edition version. Boost your progression faster than your friends by earning double Speed Points for your first four hours of multiplayer. Leave your friends and rivals in your rearview as you take control of two of the World's hottest cars, equipped with the latest performance modifications and the exclusive Satin Black livery. KEY FEATURES – LIMITED EDITION: 4 Hours of Double Speed Points – Get double Speed Points for your first four hours of multiplayer. 2 Limited Edition Vehicles – Get early access in online multiplayer to two of the World's hottest cars complete with the exclusive Satin Black livery and the latest performance modifications. The ultimate in speed and style, there isn't a more impressive piece of automotive engineering than the Maserati GranTurismo MC Stradale featuring these Limited Edition modifications: o Racing Engine and brakes tuned for increased power and control. o The Ground Effect Body increases down-force for better manoeuvrability. The powerful, lightweight and super responsive 2012 Porsche 911 Carrera S is perfect for ditching rivals at breakneck speed and comes equipped with these Limited Edition modifications: o Optimized Aerodynamic Body reducing drag for maximum top speed. o Efficient and sustained speed boost with the Nitrous Burn.