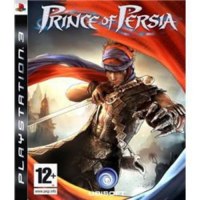 We buy for: £0.75
Sell PS3 Games. Get Cash for Prince of Persia. Transported to a land of myth and legend - The Prince of Persia finds himself caught up in an epic battle between the primal forces of good and evil, the God of Light, Ormazd versus his brother Ahriman, the God of Darkness. He witnesses the destruction of the legendary Tree of Life – an act which threatens to plunge the entire world into eternal darkness by releasing a deadly dark matter, known as the corruption, across the land. Compelled to thwart the God of Darkness and his evil minions, the Prince joins forces with a mysterious protagonist gifted with magical powers called Elika. Together they embark on a heroic quest to heal the ravaged landscape of the corruption that has plagued it and restore peace. The first episode in a brand-new epic trilogy, Prince of Persia will deliver masterful storytelling, sprawling environments and incredible set-piece moments in an experience rivaling the best blockbuster Hollywood movies. Key Features * A new hero emerges Master the acrobatics, strategy and fighting tactics of the most agile warrior of all time. Perform perfectly timed acrobatic combinations to traverse canyons and buildings and avoid the evil tremors borne out of the corruption. Armed with a gauntlet acquired from previous adventures, the Prince scale sheer cliff faces and tackle Ahriman's minions in combat! * A unique visual style Experience an ancient mythological world brought to life with an all-new art style labeled “Illustrative”, inspired by the highly detailed hand painted illustrations it takes its source from. Prince of Persia's unique graphic style is a perfect balance between classic drawings and modern modeling, offering the look and feel of a watercolour painting in motion. * A deadly new ally Combine the Prince's abilities and Elika's power to deadly effect. Her abilities will help in combat, acrobatics and puzzle-solving. She will enable the Prince to reach new heights of deadly high-flying artistry through special duo acrobatic moves or devastating fighting combo attacks. * An ancient mythological world From sprawling Persian citadels, deserted kingdoms and perilous lava rifts, discover a vivid and mythological world of unprecedented scale, with an evolving non-linear structure. With multiple paths to choose from, players will influence the game's final outcome.