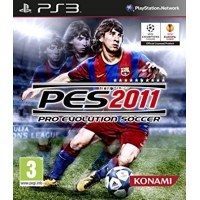 We buy for: £0.05
Sell PS3 Games. Get Cash for Pro Evolution Soccer 2011. The PES range has long been regarded as offering incredible realism and control, but PES 2011 will reinvigorate the series with the most advanced raft of gameplay additions, control options, and animations to meet the evolution of real-life football. Central to its total freedom of play, PES 2011 introduces a power bar for each player that allows the user to determine the exact strength and placement of every pass and shot. Balls can now be spread absolutely anywhere with utter precision, with long balls into space, short passes to feet and intricate one-twos allowing the player to dictate play and control the tempo of a match. This freedom of play is also extended via new AI routines designed to place every move and decision in the player's hands. No longer will assisted AI intervene during matches; users will now need to sense and react to threats; and passes will not automatically reach the nearest player. Instead, all-new routines facilitate complete control both of the player and their chosen actions in every respect to give the player sublime control over every movement. Key to PES 2011's new approach is a specially-designed control system that allows total control over every element of play. The triangulation of passes and making space using clever runs becomes paramount, and build-up play is everything. Likewise, dribbling and close control are tougher to master, and the days of making streaking runs through the centre of the park are over, as PES mirrors the real-life football. The result is the most complete and realistic PES to date. PES 2011 delivers an evolved experience that still has the key PES ethos of skill and realism at its core. PES 2011 features a myriad of additions, all designed to enhance the overall experience. The game's difficulty level has been upped thanks to the greater control on offer, while new camera angles showcase the game's stunning visuals and animation. Likewise, in accordance with the strong wishes of the fan base, both referees and goal keepers have been improved in both aesthetic and AI terms, while an all-new commentary process has been implemented that offers a better and less repetitive overview of the proceedings.