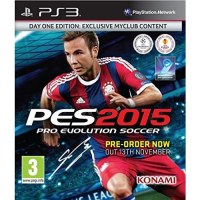 We buy for: £0.75
Sell PS3 Games. Get Cash for Pro Evolution Soccer 2015 PES2015 Day One Edition. The pitch is ours' is the ethos that dominates PES 2015. Through the combined efforts of the Tokyo and Windsor-based PES Productions team, the aim has been to recreate the drama and tension associated with a vital match. PES 2015 marks a concerted return to core PES values of total control, utterly responsive controls and unrestricted gameplay, where the user has complete control over how they play. Evert pass, shot or run is finely balanced to give maximum player satisfaction within PES 2015's on-field action. Features: * Incredible Response Times: Lightning fast controls allows users to instinctively react to every movement when the ball is in play. * On The Ball Abilities: Take on defenders using each player's bespoke dribbling skills, as opposed to relying on trick' moves. New skills include close control, responsive sprint and incorporating a much wider range of pace - from walking to sprinting. * Case for Defence: Users have complete control over when to close down, tackle, or hold up play. Successful defending is based entirely on the decisions the user makes. * Behavioural Patterns: PES 2015 now boasts a huge array of players that both look and play like their real-life counterparts. KONAMI has faithfully recreated over 1000 players this year, with bespoke animations and playing styles across its extensive player roster. Teams automatically adopt their real-life game plan, whether it is counter-attacking, out wide, or defensively minded. They run like they should, play the way they do in real life, and react emotionally as they would to fouls, goals or referee decisions – with their frame of mind actually affecting how they play! * Poetry in Motion: The individuality of the players is further enhanced with seamless animations. No sacrifice to animation has been made in the pursuit of fast response, yet the movements flow effortlessly calculated in real-time and dependent on the player's position in relation to the ball and its speed. Player models themselves are also carefully enhanced. * Bring the Noise: PES 2015 mirrors the atmosphere of a top-flight match. The crowd animations have been hugely enhanced, and the ebb and flow of a match is met with context-sensitive crowd effects and movements. * Let There Be Light: All in-game elements from players to crowd and stadium now benefit from a single source of lighting naturally bringing the game to life.