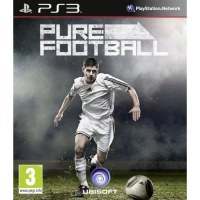 We buy for: £0.05
Sell PS3 Games. Get Cash for Pure Football. The life of the modern professional footballer is one of status, success, and celebrity. Yet there is a group of elite players who are prepared to risk everything to participate in something more. They want the beautiful game in its purest form, 5-a-side football played on the very edge, where the rules are decided by those who take part, not by a referee. It is here that the players are free to play, here that they feel most alive, here that they are first and foremost footballers… “Pure Footballers”. Key Features * Feel the fight: * No offsides, no red or yellow cards… just an intense non-stop football experience. Only by playing too aggressively at the expense of good football will you be penalized. * Take advantage of a huge array of offensive and defensive physical moves including slide tackles, upright tackles, shoulder barging, contested headers, off-the-ball tussles and more… * Play in the heart of the action: * See what the players see with the camera close in behind them, looking up the pitch. * Feel the power and intense bursts of speed of the world's finest players – all supported with VFX such as motion-blur, slo-mo and camera shakes. All this gives you the feeling that you're actually playing football rather than sitting in the stands or in-front of a TV broadcast. * Experience the Spectacular: * Take Aim – Take full control of your shots and watch them curl into the top corner or bullet past the goalkeeper. * Pure Shots – Unique presentation and control for perfectly struck shots * Cool volleys, bicycle kicks and trick animations are all authentic to real football but can be triggered with a level of frequency not seen in the professional game. * Play with the best: * 230 elite players, 17 top International teams and 3 legend teams. * These fine athletes tangibly feel different to one another, with attributes that really exaggerate differences in the speed, the strength and the skills of their real-life counterparts. * Campaign Mode – Create and take your player into the Pure Football world, then impress and recruit the world's greatest players to your team, ultimately travelling to Africa… where the best Pure Football team will be decided.