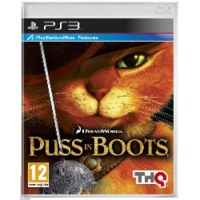 We buy for: £5.01
Sell PS3 Games. Get Cash for Puss in Boots. Step into the legendary boots and take up the trusty sword of Puss In Boots in this all-new adventure. In the Puss In Boots video game, set out on a swashbuckling adventure into the thrilling origin story of the feline hero himself. On this daring journey, players must utilize Puss In Boots' feline sneaking abilities, explore highly-interactive environments and engage in real-time swordplay against an array of fiendish foes. With the game's motion-based sword fighting element, players must swing, kick, block and unleash special attacks such as Puss In Boots' “Claw Frenzy.” True to his nature, though, Puss will always find the time to serenade a señorita or two with his guitar. So sharpen those claws and get ready – it's the adventure of nine lifetimes! Features: * Motion-Controlled. Innovative motion-based gameplay combines sword fights with stealthy sneaking skills and a number of exciting action sequences. * Interactive Environments. Utilize highly interactive environments to duck out of enemies' sight and take down banditos in creative ways. For example, bring a nearby cactus into the fight with a well-timed kick! * PlayStation 3. In the Move-compatible version for PlayStation 3, players can choose between their trusty controller or the Move remote, transforming the gameplay into a full-motion sword fighting experience.