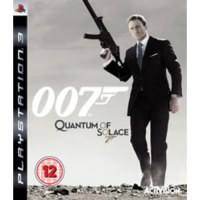 We buy for: £0.75
Sell PS3 Games. Get Cash for Quantum of Solace. Be the New Bond: The 'Quantum of Solace' game marks the first time players can become the dangerous and cunning Bond as portrayed by Daniel Craig in Quantum of Solace and Casino Royale. - Combat Variety: From silent take downs and sneaking through confined spaces, to one-on-one shoot outs and large scale battles, players experience a variety of gameplay that challenges them to think through situations and choose how they progress, whether it's through covert means or confronting enemies in full force. - Advanced combat and Realistic AI: Players engage in both first-person and third-person gameplay that allows gamers to be Bond in unscripted battles against the world's most evil villains and mercenaries. - Cinematic Appeal: Filled with armed combat, massive explosions and vertigo-inducing chases, gamers are immersed in an authentic Bond universe and drawn into epic movie moments with theatrical camera angles, split screen effects, picture-in-picture sequences, and amazing environments inspired by real world locations such as Montenegro, Venice, Bolivia and Austria. - Unparalleled Bond Multiplayer Experience: Bringing James Bond to next-gen consoles for the first time, gamers now have the ability to battle online in a variety of modes.