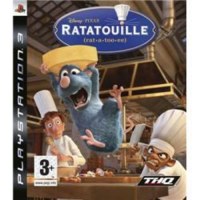 We buy for: £4.02
Sell PS3 Games. Get Cash for Ratatouille. Relive the most thrilling and hilarious moments from the Disney/Pixar film Ratatouille, as you assume the role of Remy, a young rat with dreams of becoming a great French chef, despite the obvious problem of being a rat! From the underground sewers to the bustling streets of Paris, Remy will dash, glide and slide through six action-packed, visually stunning worlds filled with dangerous enemies, intense heists and perilous missions. Go head-to-head with your friends in multiplayer mini-games or navigate your way through a sensational rat race that turns the culinary world of Paris upside down! * Relive the movie's most intense action scenes through the eyes of Remy and Emile * Over 20 challenging missions and mini-games * Explore six action-packed worlds * Go head-to-head with multiplayer games * Feature voice talent from the Disney/Pixar film