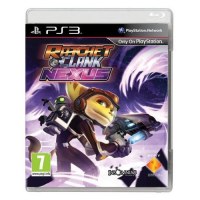 We buy for: £15.24
Sell PS3 Games. Get Cash for Ratchet & Clank Nexus. After one of the most infamous manhunts in galactic history results in the capture of Vendra and Neftin Prog, Ratchet and Clank offer to escort the dangerous criminals to the Vartax Detention Centre. After a daring orbital jailbreak at the forgotten edge of the galaxy, Ratchet and Clank find themselves lost in an abandoned sector. There, in deepest space, they uncover an inter-dimensional event that threatens the universe—and forces Ratchet to decide what's really important. Features: * Brave the untold dangers of dark space with zero-gravity missions, solve mind-bending platforming puzzles with all-new Clank gameplay, and fight alongside legendary heroes Captain Qwark, Talwyn, Cronk, and Zephyr. * Traverse through the zero-gravity of space and explore a mysterious sector filled with new planets to explore, along with hidden dangers and dark secrets yet to be uncovered. Wield over-the-top weapons including: * Vortex Grenade: Expose a black hole vortex to trap and eliminate enemies. * Winterizer: Instantly freeze enemies by transforming them into harmless snowmen. * Nightmare In A Box: Unleash a ferocious creature to intimidate and scare enemies from a certain area. * Grav-tether Gadget: Meander your way through impassable areas using the Grav-tether gadget.