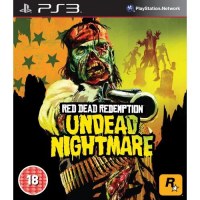 We buy for: £1.32
Sell PS3 Games. Get Cash for Red Dead Redemption Undead Nightmare. Across the vast Western frontier, a plague is spreading When former outlaw John Marston wakes up at his farmhouse, he finds a world gone insane: overnight, deranged hordes have overrun the towns and outposts of the American frontier. In a desperate attempt to save his family, Marston must traverse a world torn apart by chaos and disorder, using every skill he Has to survive long enough to find a cure. Undead Nightmare combines a terrifying single player campaign as well as the full suite of amazing multiplayer content for one of the biggest games of the year: Red Dead Redemption. Undead Nightmare is a standalone game that does not require a copy of Red Dead Redemption to be played. Single-Player * Take on a brand new, undead-riddled, single-player adventure. * Experience completely new gameplay mechanics, weapons, and world design. * Battle against four different Zombie classes with detailed character design. * Encounter Graveyard action areas as well as Undead and Mythical animals. * Find New Collectible Outfits and Challenges to complete. * 7+ hours of single-player gameplay. Multiplayer * Join Friends across the Dying and Undead West in exciting Co-Op missions and Competitive Modes. * Attack and defend in Stronghold Mode, or claim territory in Land Grab. * School your friends in Poker, Liar's Dice and Horse Racing. * Annihilate your enemies with the deadly Tomahawk and Explosive Rifle. * Play online as iconic characters from Red Dead Revolver or as the legends from Red Dead Redemption. * 15+ hours of multiplayer gameplay.