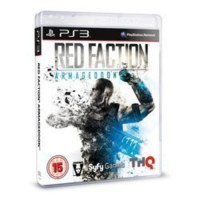 We buy for: £0.15
Sell PS3 Games. Get Cash for Red Faction Armageddon. A long-dormant evil emerges from the caves of Mars, unleashing Armageddon on the planet’s colonists. With this force stopping at nothing to cleanse the planet of life, mankind finds itself poised on the brink of extinction. Red Faction®: Armageddon™ expands on the critically acclaimed, best-selling franchise with new, groundbreaking challenges. You are humanity’s last hope for survival. Features • Hell on Mars – Darius Mason can only watch as the surface of Mars is destroyed. Seeking solace underground, an even greater threat emerges against humanity. • Nano Forge – Unleash the devastating force of the Nano Forge with massive concussive blasts or reconstruct downed colonist defences with Geo-Mod 2.0. • Martian Underground – The truth behind an ancient evil will force Darius to wage a battle across the devastated Martian surface, beneath massive frozen glaciers, and over rivers of broiling magma.