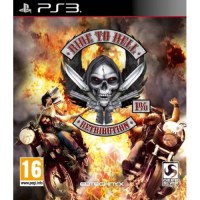 We buy for: £1.05
Sell PS3 Games. Get Cash for Ride to Hell Retribution. Ride to Hell is the hard-hitting over-the-top action game of 2013 that doesn't hold back. Players take on the role of Jake Conway, a man hell-bent on bringing down a ruthless biker gang called The Devil's Hand. Jake will use any means necessary to enact his revenge, weaponizing his environment, getting up close and dirty with brutal melee combat, and engaging in high-speed shootouts on his custom hog. It's all about kicking ass in the name of revenge. Ride to Hell is a one-of-a-kind rock and roll brawler, set in the distinct 1960's era of anarchy, with its mix of gritty, grounded reality and rebel sensibilities. No matter if it's one sneering grunt or ten, the only thing that awaits them is broken bones. Players can utilize deadly intercept maneuvers, brutal counter-attacks, and bloody combos grabbing anything they can get their hands on to destroy the Devil's Hand. They will be riding for their life, bringing chaos to the streets and employing devastating, cinematic Rage Attacks on foot and on bike. Ride to Hell hits hard and doesn't look back.