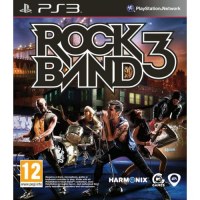 We buy for: £3.58
Sell PS3 Games. Get Cash for Rock Band 3. The most critically-acclaimed music title in the video games world gets its biggest update ever. With more songs than any of its predecessors you also get a whole new instrument to master with the new keyboard controller. With over 80 original tracks from some of the biggest bands in rock history on the disc you can also import songs from previous games and downloads for a massive library of over 2,000 titles. Plus, thanks to the new keyboard option and the vocal harmonies from The Beatles and Green Day spin-offs, up to seven players can now play their part in the same song. If you get really good you can test your skills in the new Rock Band Pro mode, designed not just for difficultly but to teach you the skills necessary to play real instruments. Whether you just want a casual party game or a fun path to creating a real rock band this sequel has everything. Key Features * Music Master: The biggest collection of music, the widest selection of instruments and all new serious and casual play options combine to make the best Rock Band game ever. * Key Addition: For the first time ever in a music game use the all-new keyboard controller, with many of the new tracks designed to emphasise its use. * Professional Help: Play the new Rock Band Pro mode and learn real-world skills for playing music, especially if you use the new Pro Guitar controller. * Party Hearty: If you'd prefer not to take your game so seriously there's a whole suite of new party modes with instant play options, a new career mode and online leaderboards. * Record Collection: Play any of the 83 tracks on the disc or get access to more than 2,000 classics songs from bands ranging from T.Rex and The Doors to The Smiths and David Bowie.