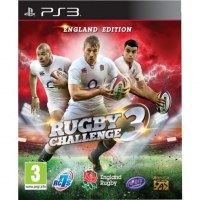 We buy for: £8.25
Sell PS3 Games. Get Cash for Rugby Challenge 3. This is the game that all Rugby Union fans have been eagerly waiting for, as such we are expecting big things from this game. It even features the new Six Nations Champions on the front cover! It is the first true Rugby Union game on next-gen consoles featuring the debut of the Rugby Seven's (which this year will be featured in the Olympics), Plus England, (those new Six Nations Champions), the Aviva Premiership, South African clubs, plus The Springboks, The All Blacks, The Wallabies, the Currie Cup and much more. All the thrills and excitement of top-flight Rugby have been truly recreated in Rugby Challenge 3 The Rugby Challenge 3 feature list has been driven by the fans of Rugby Challenge 2 and includes features such as:- NEW! Rugby Sevens - this first time addition brings all the realism and fast-paced action of live seven-a-side Rugby to the Rugby Challenge series. NEW! Take total control in Be a Pro mode. Join a club team as a rookie and control your own destiny over 13 action packed seasons. Complete match goals to improve your skills as a player and work towards becoming the captain of your club. Work your way up the domestic ladder, and impress selectors to play for your national team on the world stage! NEW! FanHub - the interactive Player Creator allows you to create yourself as a player and play then through the ranks. Players and teams can be shared online across all supported platforms. BRAND NEW! Crisp next gen graphics - increased resolution and textures. Real-time commentary from seasoned rugby commentators Grant Nisbett and former All Blacks turned commentator Justin Marshall. French language commentary from Eric Bayle and Thomas Lombard. Play in different game modes including: Single Match; multi-team Competition; extensive multi-year Career Mode; Be a Pro Mode; and Online Multiplayer Mode.