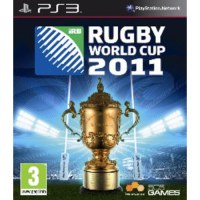 We buy for: £0.15
Sell PS3 Games. Get Cash for Rugby World Cup 2011. Developed by leading Rugby developer HB Studios, Rugby World Cup 2011 represents the studio's first Rugby game on this generation of consoles and takes full advantage of the available hardware to create a game that reflects the prestige of the world's third-largest sports event. This innovative and unique game will reflect in detail the incredible action and passion of Rugby's showcase sporting event with the most accurate Rugby experience ever created. Rugby World Cup 2011 will challenge players to pick from the 20 Rugby World Cup 2011 participating countries, and attempt to lead their team through the pool phase progress to the Final and the opportunity to lift the prestigious Webb Ellis Cup. National rivalries, venues and player personalities are perfectly captured as participants will fight for the pride of their nation in either solo play or with up to three friends in local multiplayer matches. For the first time, HB Studios will give players the chance to fight for the glory of their country online by challenging other players to one-on-one matches on PlayStation Network.